Deep Learning Analytics recognized a fourth year in a row

Our partner Deep Learning Analytics has been recognized again for its growth and diversity.

Sponsored by Monday Properties and written by ARLnow.com, Startup Monday is a weekly column that profiles Arlington-based startups and their founders, plus other local technology happenings. The Ground Floor, Monday’s office space for young companies in Rosslyn, is now open. The Metro-accessible space features a 5,000-square-foot common area that includes a kitchen, lounge area, collaborative meeting spaces, and a stage for formal presentations.
(Updated at 12:05 p.m.) John Kaufhold had been working at NIH doing deep learning research, but realized he’d be better off working on his own.
So he quit his job in May of 2013 and began Deep Learning Analytics, which is currently based in Rosslyn, just a month later. 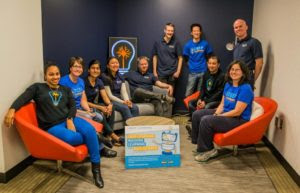 Deep learning finds patterns in data. Some examples of deep learning and artificial intelligence are Siri, when the technology learns a user’s voice and transcribes his or her words, and self-driving cars that learn roads and driving patterns over time.
At Deep Learning Analytics, data scientists specifically focus on the content of images, Kaufhold said. In other words, they find things in images and say what they are.
“You can do that in medical, supply chain management, you can do that in biology, you can do that in defense applications. So there are plenty of applications where you can get a lot of economic value from you have an image and then you have to say what’s in it,” Kaufhold said.
Some of the first projects Deep Learning Analytics worked on included analyzing combat casualty care and predicting school dropouts for Arlington Public Schools.
One of the biggest and most surprising projects the startup won was a government program by the Defense Advanced Research Projects Agency (DARPA) on analyzing radar images. DARPA was having a problem looking
at radar images and could not get past a longstanding benchmark. Research into the problem had been abandoned for years. But then Kaufhold approached the project manager at DARPA proposing that deep learning could help.

So Deep Learning Analytics sent a proposal and within six weeks they were significantly outperforming the state of the art. As a result, they were awarded $6 million for the project and had beat out major government contractors such as Boeing, Raytheon, Northrop Grumman and Lockheed Martin and only two people including Kaufhold worked on the proposal.
“It was really unusual that two people could write a proposal for a $6 million program and win it,” Kaufhold said. “It’s also crazy that not only did we win that we then won the next phase while competing the companies that should have been able to outperform us.”
In July 2017, Deep Learning Analytics was awarded another $6 million for the second phase of the project. Now the startup has gone from 2 employees in 2014 to 12 today.
In November, for the third year in a row, the startup was named the one of the county’s “Fast Four” fastest growing companies by Arlington Economic Development.
“It’s great to be recognized for our growth and it also speaks to Arlington as a place to grow a small business like ours especially in a space that’s really hard to recruit in, it’s really hard to find good data scientists and talent that can do things like deep learning and artificial intelligence,” Kaufhold said.
While Kaufhold said he’s honored by the recognition, he said there isn’t enough credit given to Deep Learning Analytics for its diversity. The startup currently has six men and six women on its team.
“That’s something I wish were recognized more in the Washington, D.C. area. I think we could be a better public beacon of that kind of leadership of women in this region,” he said.
By Jim - March 12, 2018