In honor of Women's History Month, VT's Northern Virginia Center will screen the documentary CODE Debugging the Gender Gap, in Room 200 at 7pm.

For more information about this one hour documentary, please go to: https://www.codedoc.co/

CODE documentary | Debugging the Gender Gap
CODE documentary exposes the dearth of American female and minority software engineers and explores the reasons for this gender gap. CODE raises the question: what would society gain from having more women and minorities…
codedoc.co
By Jim - March 28, 2017 Both contingents had a personal stake in the project. The McKinley students found high levels of lead in the Anacostia River that flows through Washington, D.C. And the Winneba students in southern Ghana found pesticides, hospital waste, sewage and other pollutants in a nearby lagoon used for

From the VT NCR Highlights Blog

Students improved prototypes for the World Smarts Challenge at Virginia Tech’s Thinkabit Lab
Before facing off at the IREX World Smarts STEM Challenge Contest and Showcase in Washington, D.C., last weekend, 48 students from high schools in the metro DC area and Ghana, Africa, headed off to the Thinkabit Lab at Virginia Tech’s Northern Virginia Center in Falls Church.
In more than nine hours of interactive sessions at the lab, the students learned about programs offered by colleges and universities and a wide range of technical careers; benefited from hands-on coaching by Thinkabit Lab research faculty on how they could improve their prototypes; and practiced their presentations for judging on the following day at the Omni Shoreham Hotel in Washington, D.C.
"I was impressed with all of the student finalists and their technical solutions to real-world alternative-energy needs and pollution-mitigation challenges," said Jim Egenrieder, research faculty and director of Virginia Tech's National Capital Region Thinkabit Lab. "They have all now discovered that empowering feeling of designing and building things that work and things that change the way people imagine the future. We need more activities like this -- that make STEM fun and authentic, but also inclusive, collaborative, and transformative."
Team “Big Bang Brains of the World,” comprised of students and teachers from Eleanor Roosevelt High School in Greenbelt, Maryland, and Edinaman Senior High School in Elmina, Ghana, won the competition with 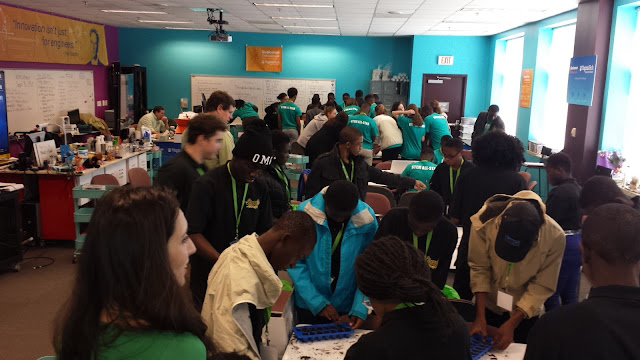 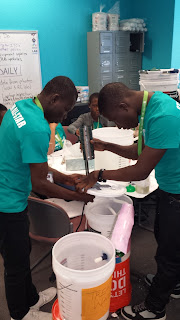 On Friday, March 17, students from Africa (Ghana) and partnering students from D.C. area schools participated in more than nine hours of interactive sessions at the Lab.  They learned about the kinds of programs that colleges and universities offer, explored a wide range of technical careers, and benefited from hands-on coaching by Thinkabit Lab research faculty on how they could improve their prototypes.  They also practiced their presentations together for the first time for the judging event on Saturday at the Omni Shoreham Hotel in Washington, D.C. 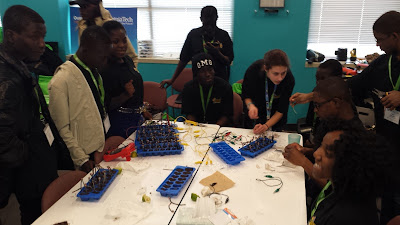 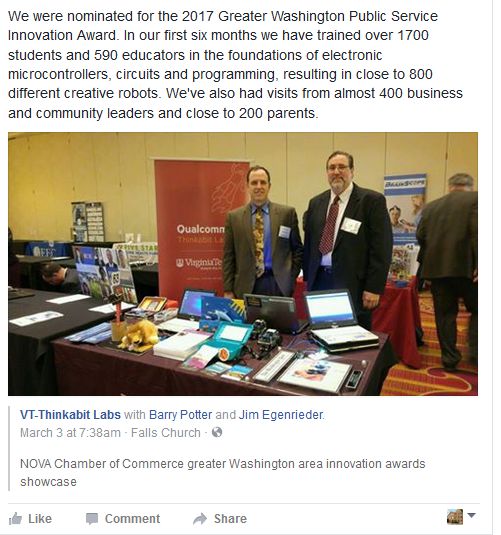